Node-Red is a visualized programming environment that comes from the IoT area. It is primarily used to connect sensor hardware and the corresponding data visualization. Node-Red consists of so-called nodes, which are connected to one another using rubber band technology and thus determine the flow of data.

What do sailors get out of it? 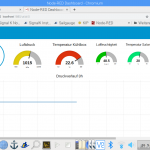 Node-Red offers nodes to read sensors, to process NMEA-0183 data via serial interfaces or to read and process SignalK data streams. This means that data made available in the on-board network by Openplotter, for example, can be used directly.
The advantage over SignalK instruments, for example, is that the read-in data can be processed and changed, and the visualization of the data can also be influenced more flexibly.

What do you have to be able to do to use Node-Red? 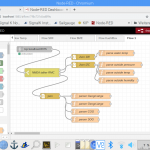 Many things can be implemented in Node-Red without programming knowledge, but program code (Java) can also be accommodated in certain nodes. That makes this environment very flexible. Once the basic principle of how data control works in Node-Red has been understood, you can expand your knowledge bit by bit without facing seemingly insurmountable hurdles. Extensive documentation is available on the website of node-red.org, various sample flows ("program sequences") are available for download.

What does Node-Red cost?

Node-Red is free, it runs on various platforms, in addition to the Raspberry and other Linux versions, including Windows computers.